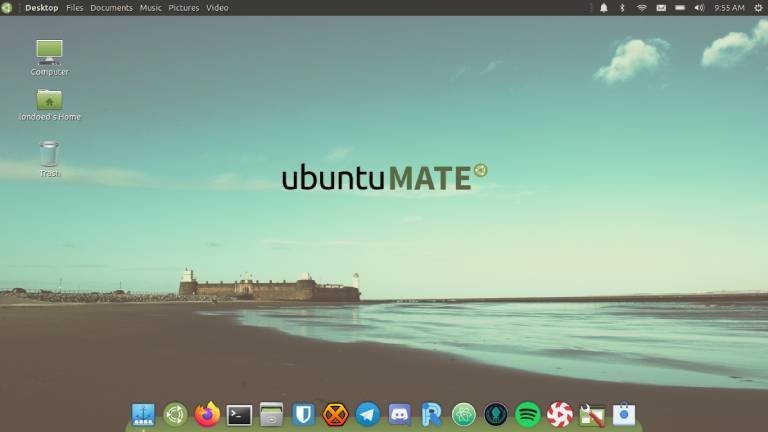 If you are new to Linux or haven’t spent much time around the massive ecosystem behind it, there can be some very strange rationale behind the naming conventions people use for their software. For starters, the GNU project, the first attempt at creating a Unix-like operating system that was free to everyone, uses a recursive acronym for its name: GNU’s Not Unix! This may seem quirky to the outsider, but it is a way to poke fun for developers.

In another instance, Debian, one of the most popular and largest Linux distributions in the world started from humble beginnings in 1993 and was named such by combining the name of the author, Ian Murdock, with the name of his then-girlfriend, Debra. Hence, The Debian Project was born.

The MATE desktop environment is no different. Though it may appear to be pronounced as the proper English speakers’ common way to refer to a close friend, it is actually based on a South American plant known as yerba mate (Ilex paraguariensis). The plant is commonly used to make a popular brew known simply as mate (pronounced mah-teh).

Even with the confusing and sometimes controversial nature of naming in the Linux world (see the GNOME project), it is this lighthearted nature of humor that has drawn me into this world of Linux for over a decade.

Linux Desktop Environments: Past and Present

Personally, I started out on KDE 3 with SuSE Enterprise Linux 10. I thought it was great, but looked a bit funky/cartoonish compared to macOS or even Windows XP. I remember the first time I heard about the Ubuntu distribution in 2008 and saw screenshots of the GNOME 2 interface it used. It definitely captured my attention and appeared like a professionally polished desktop that was easy to use. Add in the community love and quickly growing popularity for the Ubuntu distribution in general and the way it “just worked” and it was obvious that I would explore this distribution of Linux first.

The first time I installed Ubuntu on actual hardware was with the 11.10 release, which used a completely different desktop environment known as the Unity shell that was designed and implemented by the company behind Ubuntu, Canonical. It was definitely a jarring change from the GNOME 2 layout, but over time I learned to love Unity with the HUD (Head’s Up Display), global menu, lenses, and immense amount of real estate since the launcher was set to the left of the desktop. In addition, the keyboard shortcuts were expansive and made sense (and easy to learn since holding down the “super” key overlaid them on top of the desktop).

The decision by Canonical to switch to Unity was something born of a major divide in the GNOME community at the time. GNOME 2 was being discontinued for the next iteration of the DE, GNOME 3. This split the community in two: the people who didn’t care for the drastic stylistic and workflow changes in GNOME 3 and wanted to continue with the familiar GNOME 2 layout, and those that were eager for something new and dove into GNOME 3 without hesitation.

This massive split caused some of the newer distributions at the time to create their own GNOME inspired DEs. Linux Mint forked GNOME 3 to make their Cinnamon desktop. The Solus Project forked GNOME 3 as well to create their now popular Budgie desktop. Even today, GNOME 2 is widely considered by the community to be the most popular DE of all time, and that fact instituted the creation of the MATE desktop environment, which was forked from the GNOME 2 codebase by an Argentinian developer, known as Perberos in the community, and has been updated and optimized extensively to be compliant with both GTK2 and GTK3 applications.

My Personal View of the DE Landscape

After Canonical announced that development of the Unity shell would be discontinued in favor of GNOME 3 taking the reigns as the default DE of Ubuntu, I started looking for other options as I just could not get into the GNOME 3 workflow and stylistic look, even with heavily utilizing the tweak tool and GNOME extensions.

KDE Plasma 5 soon became my go-to DE, due to its incredible flexibility, for quite a while. Plasma comes with GUI menu options for customizing nearly every aspect of your desktop that you can imagine. This is incredibly powerful because of the freedom and uniqueness it produces for each user, however, it also can be difficult to locate the aspects of the desktop that you want to tweak because there are so many windows and options. It can be quite overwhelming to new users of the DE.

When I was looking for a distribution that would work well on our home desktop computer that is used by the whole family, I decided on Linux Mint due to its user-friendliness and beautifully modern look. However, as I played around with Cinnamon more and more, I began to love the DE. It had just the right amount of easily available customization without the massive tweaking overhead of something like Plasma.

Quickly, I began switching all of my machines to utilize the Cinnamon DE. As I grew more comfortable with it, I really began enjoying the workflow and design decisions more and more. I used Cinnamon on most of my machines for over a year and a half. However, in a chance turn of events, I found a new and enticing option.

The Green Side of the Force:

In mid-January of 2020, while returning our Christmas decorations back to storage in our basement, I stumbled upon a box I had not seen in a long, long time. Inside that box was my old 2010 13″ Apple MacBook laptop that had not been booted since at least 2013. To be honest, I never thought that I would ever touch or boot this computer again. In fact, when I brought it upstairs, plugged in the power, and booted it, the computer failed to allow me into the old Mac OS X version it had been running.

However, through listening to many Linux-related podcasts, I had heard multiple times that one of the best Ubuntu-based distributions for old hardware was Ubuntu MATE, a project created in 2015 that is lead by the newly-instated Ubuntu Desktop Team Lead at Canonical, Martin Wimpress.

So, with this old hardware in my hand, I decided to attempt to give it new life. I burned Ubuntu MATE 19.10 onto a USB stick and installed the operating system on the decade old computer. Boom! The install was a piece of cake, and when I rebooted, the computer booted up the quickest that it ever had into the Ubuntu MATE desktop. I was absolutely amazed that I was able to use this old computer as if I had just bought it off the shelf. Everything was quick and snappy and the welcome guide was extremely insightful and intuitive, causing me to get lost in the myriad of system options that were available.

One of my favorite tools in Ubuntu MATE is the layout switcher. This allows you to change the look and feel of your desktop with preset options (or you can customize it in any way you want). After trying out Mutiny (based on the look and feel of the Unity shell) and all the different options, I settled on Cupertino (which has a macOS like look and feel). The Cupertino layout definitely reminds me of how I usually set up the layout of my KDE Plasma installations, however, I was able to do it with a simple click of a button, instead of navigating multiple window screens.

Another feature that I love about Ubuntu MATE is the availability to enable a Heads-Up Display (HUD), which allows you you run commands in the program that is currently in focus by just tapping the Alt key and searching for a command. This allows me to live in the space that I love most — using an efficient keyboard driven workflow. No more switching through file menus, I can easily find the option that I’m looking for in seconds. The HUD was a major component in the Unity shell that I absolutely loved and seeing it utilized in Ubuntu MATE is incredible!

In addition, the use of a global menu in the Cupertino layout is great. The global menu places the menu options of the current application in the top panel, allowing window sizes to be smaller and more real estate available on the desktop for multiple applications.

Moreover, the pure speed of the MATE desktop is impressive. It feels extremely lightweight, like Xfce, but provides a much more modern look and is fully-featured as we have come to expect with a traditional desktop in the Linux world. These days, many DE’s have become incredibly fast (Looking at you Plasma team!), so this is not as big of a deal, but it’s always nice to know that my system usage is optimized, especially on older hardware.

I have really only started my journey with Ubuntu MATE, but I am definitely considering joining Team Green on more of my machines. I will probably never leave Cinnamon and Plasma completely behind, but the incredible features that Ubuntu MATE has to offer make it so enticing that I find myself enjoying playing around with the system like a kid in a candy shop. Around every bend is a new incredible feature or design element that you can tell the team behind it put a lot of thought and effort into.

I will probably add to this post as I discover more and more about Ubuntu MATE and hopefully will come up with an even more compelling argument to switch over to the Green Side of the Force.

Before I end this post, I just want to say thank you to Martin Wimpress for the incredible work and passion that you have injected into this project as well as the entire Ubuntu MATE team for their ability to truly craft a masterpiece of the modern OS that focuses on the end-user in every respect. Thank you!

EDIT (02/02/20): The picture below has been updated to my current Ubuntu MATE setup. I just can’t stop using Mutiny. I guess all those years of the Unity shell have really shaped who I am and how I like to work!

If you have experience using Ubuntu MATE or the MATE desktop in general, I would love to hear your thoughts in the comments below!